Now you know it. Quilting and writing are my two, slightly obsessive passions. So, how could a quilt possibly figure in a historical novel set in the 1840s in Van Diemen's Land? I came across the story of Kezia Hayter, a rather intrepid young woman recruited by the famous Quaker Elizabeth Fry to accompany a group of women prisoners transported to, you guessed it, Van Diemen's Land. 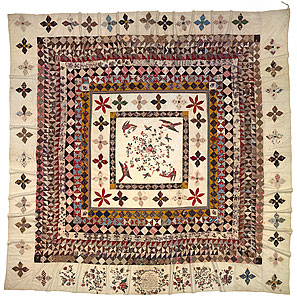 Elizabeth Fry (with her committee of concerned Quakers) visited the women in prison, comforted them, prayed with them, and before these over 175 women left, the Quakers brought each woman a bag of sewing notions and fabric for the long journey, that their hands might be usefully employed. Their ship, the Rajah, captained by Charles Ferguson, sailed south, and somehow these women created a quilt to present to the Government on arrival in April 1841.

The first miracle is that the quilt was finished. Parts, true, are clumsily sewn. Not all of the women knew how to sew. Certainly the dark, cramped conditions and the constantly rocking ship added to the difficulty of sewing. But the final quilt -- made of 2,815 pieces -- is a marvel of quilting, applique, and embroidery.

The quilt was duly presented to Lady Jane Franklin with a touching hand sewn announcement: 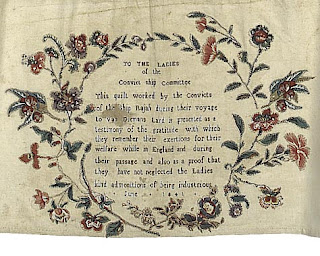 And then the quilt disappeared, only to be rediscovered in England and returned to Tasmania in 1989. It now resides in the National Gallery of Australia. The Rajah Quilt is taken out just once a year so that visitors can appreciate this artifact that these nameless women created -- beauty where none existed, perhaps hope to some. But their work is remembered, and I would very much like to see this quilt for myself. Perhaps one day.


Read more about the Rajah Quilt at the National Gallery of Australia or about Kezia Hayter and her captain, Charles Ferguson.
Posted by Beth Camp at 6:56 AM