I just finished reading Alan Brennert's fascinating Honolulu, a tale of Korean immigrant life in Hawai'i in the 1920s and 1930s, the scope of the book from the point of view of an imported picture bride who experiences plantation life, Honolulu's red light district, the stigma of divorce, and a slow climb out of poverty. Brennert's book helps me see Hawai'ian history more clearly and the rich blended ethinic mix we take for granted today. Also, rare for me, I forgot he was writing from a female point of view. An excellent read.

I also found his 'Author's Note' at the end of the book entrancing. For Alan Brennert does not stint on his research or in telling us how real people (from Somerset Maugham to the original Charlie Chan -- Chang Apana) inspired him. He lists at least 60 books that were helpful in developing a "true" sense of Hawai'ian culture.

Makes me feel a little better about the piles of books that surround me yet -- and thankful for interlibrary loan (two books in now, Kay Daniels, Convict Women, and Deborah Oxley, Convict Maids: The Forced Migration of Women to Australia). Today was a good day. Over 500 words, new plot twists, and outside, a hummingbird sips at our new bird feeder.
Posted by Beth Camp at 7:26 AM No comments:

This week, I balance between writing and research, at times buoyed by Wesley Dean Smith's comments that if you can't find the answer to your research question within three clicks on Google, your readers won't give a damn. But my heroine is a teacher in 1842, Hobart Town, Tasmania. And let me tell you, I couldn't find info within three clicks. In fact the search was so convoluted that I don't think I could even reconstruct it.

But, here is the earliest school I can find, Ellinthorpe (see Marjorie R. Theobald's book, Knowing Women). The school was established in 1823 by a most intrepid woman, Hannah Maria Davice, who emigrated with a friend, Elinor Binfield, and a younger relative, Susannah Darke Purbrick in June, 1823. Hannah opened her school in rented buildings in Hobart Town within a month of arriving. She married George Carr Clark in December 1824 and continued to teach, changing locations to Carr Field House opposite the Post Office in Hobart, and then to Ellinthorpe in September 1827, described as a rural Victorian estate. Apparently, Lady Jane Franklin, wife of the Lieutenant Governor of Tasmania, was not too supportive, having educational projects of her own, but the Australian Dictionary of Biography reports Ellinthorpe was the most prestigious school in the colony, serving about 40 girls. 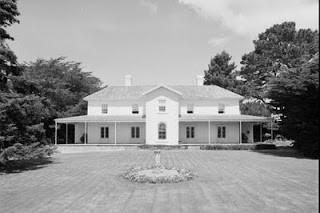 Hannah closed her school in 1840, taking her 6 children back to England for further education and leaving her husband behind. But Susannah Purbrick (Mrs. John Knight) opened her own school, Carr Villa, near Launceton in 1848 until 1866. I'm on the hunt for more details about how these schools worked and who the students were. That gap in 1842 might very well be useful for my story. And back to work it is, with more than three clicks!

Source of picture of Ellenthorpe Hall.
Posted by Beth Camp at 9:07 AM 1 comment: