Each day begins with faith
that word will follow word.
This is my ars poetica,
my house I build
stick by stick
and stone by stone,
my soul space between my hands,
my dreams
as harmonious as a white moon
rising imperturbly
through the night.

Crack me open.
Seeds spill out
from heart and bone.
They float and dance,
a mystery, a joy.
As I write, the very pulse
of the mountain shimmers through me.
I can see into the eye of a spawning salmon.
For a moment, the shape of an aurancara tree
is fixed, its bristling branches spread out
in two directions, to the earth, sloping down,
and to the stars, curling up,
a poem.

This poem is posted in response to Poefusion 36, to explain what a poem should be, inspired by the magnificent Ars Poetica by Archibald MacLeish. Sunday Scribblings' prompt this week is simply ¨"follow." Some of you readers know that I'm traveling in South America. This last week has been a challenge for my laptop computer was stolen in a very small town in southern Peru, after a 17 hour busride. While I did have backups, I was shakey over the loss and very uncertain how I could write without a computer. I posted a query on Internet Writers Workshop, their Writing listserv, and cannot tell you how wonderful it was to hear from other writers and to have a solution that brought me back to the keyboard and writing in only 2 days. So part of this poem is a celebration simply of the ability to write.
Posted by Beth Camp at 5:11 AM 1 comment:

I stand in front of this quipu,
the second one I’ve been close enough
to touch with my own hands,
this strange belt of long, knotted strings.

When the conquistadors came
to the land of the Inkas, the Mapuche, the Wari,
these quipus were burned, idolatrous.
Only later scholars discovered these belts,
made of woven llama or alpaca wool,
knotted in units of ten,
these “talking knots” carried information
from kingdom to kingdom,
high along the Andes trail,
the knots their own language,
a chronicle, a census,
accountable, transparent
in their fragile white, red and black twists of wool,
some knots figure-eights,
more than numbers, sacred colors, stored infinity
that, it is said,
a few could read with their eyes closed,
their fingers “telling” the knots.

In the whole world, only 600 quipus remain.
This is one.
Not all that was burned is lost.
Some things are known and not told. 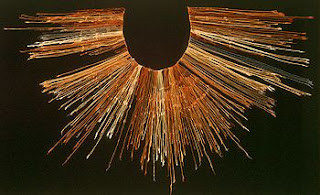 The Museo Chileno de Arte Precolombino, here in Santiago, Chile, has an amazing collection of Pre-Columbian artifacts, including textiles and this one quipu. I read scholars are now finding possible clues about the “language” of these quipus in paintings of textiles and pottery. I was still very moved to see this beautiful quipu and so wrote this second response to Sunday Scribblings' prompt on Language. The image comes from Wikipedia.
Posted by Beth Camp at 3:26 PM 3 comments:

#30 Neruda Retold: Fable of the Mermaid

Sometimes mermaid stories are about an ugly side of the relationships between men and women. Here, I followed Poefusion’s prompt to make a new poem by adding lines of my own between the lines of this mermaid poem by Pablo Neruda, still one of my favorite poets.

What was learned? That poets work in tight levels of meaning. I went online to post my version and discovered another Poetfusion poet, Gautami Tripathi, also working with a Neruda poem. Ha! And then I traveled up to La Sebastiana to walk through Pablo Neruda’s home here in Valparaiso, Chile. No photographs were allowed, but my eyes are full of this wonderfully creative space.

You can read Pablo Neruda's original version here: Fable of the Mermaid and the Drunks

"Neruda Retold: Fable of the Mermaid"

All those men were there inside,
as if they were waiting
when she came in totally naked.
They had been drinking: they began to spit
and laugh as if they had been given a toy.
Newly come from the river, she knew nothing.
She was as perfect as the moon.
She was a mermaid who had lost her way, and
the smell of the sea filled the room.
Their insults flowed down her gleaming flesh.
Obscenities drowned her golden breasts.
Not knowing tears, she did not weep tears.
Not knowing clothes, she did not have clothes.
They blackened her with burnt corks and cigarette stubs,
and rolled around laughing on the tavern floor
until one by one, they became quiet.
She did not speak because she had no speech.
Her eyes were the colour of distant love
shaming the men before her.
Her twin arms were made of white topaz
that burned those who touched her.
Her lips moved, silent, in a coral light
scream and the room was empty of life.
Suddenly she went out by that door.
Entering the river, she was cleaned,
shining like a white stone in the rain,
and without looking back, she swam again
swam towards the deep sea, swam towards life.
Posted by Beth Camp at 6:50 PM 2 comments:

The two poems lie side by side.
Their words float off the page,
their meaning some place
between two mirrors.
The serpent uncurls and in an instant
all is known and then lost.
I look each word up
in the dictionary of my imagination,
but the nuances shimmer, love,
the letters flicker and twist,
transforming what is known
into something strange and new,
perhaps close to what the poet cried
in her dreams.

This week's Sunday Scribblings asks us to write about language. I remembered reading Pablo Neruda to prepare for a competency exam in Spanish. No matter how long I studied the vocabulary, the meaning in translation kept shifting. I found a book once that had Sappho's fragments in the original Greek and wondered how we could construct meaning out of a partial poem over such a distance of time and culture. Sometimes I think poets write in a very personal code, adding another barrier. Even our popular vocabulary changes over time, so that what once was a "good" translation of a classic sounds somehow off and not true to the writer's intention.
Posted by Beth Camp at 1:26 PM 4 comments:

If I could count the hairs on your head,
I would count each one
with pine needles frosted white, or
as elm leaves drifting yellow in the wind, blowing free,
or in the tiny filaments of jellyfish swimming,
swimming in the sea. I see cities ratcheted up
your hills and at night, stars scattered on the ground.
And if I were lonely, I’d wrap myself
in dreams of you and never sleep.

Tuesday's Title from Poefusion is "Earth's Hair."
Posted by Beth Camp at 4:51 AM 2 comments: