I don't really know if this is possible. We'll be in Philadelphia and Spokane for November, then to Costa Rica, but I've signed up for NaNoWriMo. This crazy and rapidly spreading writing scheme has thousands of participants, each writing 50,000 words in one month. That's one incredible draft. And we all start with word 1 on November 1. So, poetry to the side, revisions to the side, I'm taking the month of November off and plunging into . . . I don't know what yet! Any one else want to play? For more info, go to www.nanowrimo.org
Posted by Beth Camp at 2:06 PM 2 comments:

Email ThisBlogThis!Share to TwitterShare to FacebookShare to Pinterest
Labels: NaNoWriMo

A maiden waits in leafy bower
in quiet repose, bound in terror,
long hours gone, her forehead gleams
white, her eyelids droop in dreams
asleep, her hand falls open.
The unicorn, of jeweled eye and jeweled horn,
approaches slowly. With bated breath,
hunters watch the maiden sleep, a little death.
Is she virgin, the hunter hisses. The unicorn
will know: Its nostrils flare,
he dips his head, once, twice he circles lady fair,
then settles down beside her thighs,
thus ensorceled to amazed cries.
As hunters rush the sacred circle,
the maiden wakes to dreams banished;
the unicorn's white, white flesh vanished. 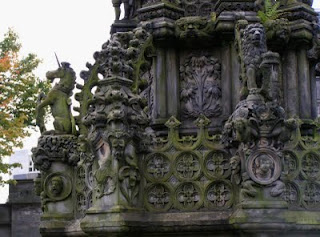 Yesterday we visited the Palace of Holyroodhouse, the current residence of the Queen here in Edinburgh, and its exquisite abbey. As we walked into the central courtyard, a majestic fountain greeted us, embellished with mythical animals, a lion, griffin, deer, and a unicorn. This castle and accompanying abbey date from the 12th Century. The lion and the unicorn, their past history together uncertain, are paired everywhere, well washed with gold and glitter.

I've long been a fan of Tracy Chevalier's The Lady and the Unicorn, but her book leaves the relationship of the lion and the unicorn unsolved. Once we went to England, we saw the lion and the unicorn everywhere as symbols of royal power. I learned last night that Stirling Castle (just north of Glasgow) has a team of master weavers working on the Hunt of the Unicorn, a set of tapestries, perhaps inspired by the famed 14th Century tapestries currently at the Musee de Moyen Ages, or Cluny, in Paris, the Lady and the Unicorn. Legend suggests these tapestries once were at Stirling Castle. I hope we can go there before our last three weeks in Scotland end.
Posted by Beth Camp at 12:16 AM 1 comment:

Native American traditions say
We cannot tell someone else's story.
We can only tell the stories that belong to us.
Yet I stop in front of this spirit mask
in this glass case
in this museum,
remembering.

The mothers tell us, “Don't go into the woods alone.
Ghost woman waits for you,
her round mouth cooing,
her long hair drifting pine needles
as she walks
hunched over, singing.

The forest is dark.
I stayed on the beach;
you went into the woods and never returned. 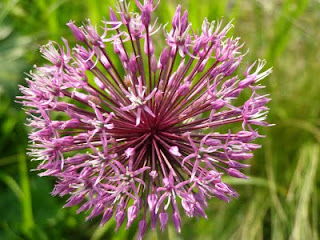 My very bones are tired
as we pass through the Great Glen.
Its trees shimmer yellow and
bow down, leaves on the ground.
Once green ferns now brown to bracken;
now the last flowering before winter,
purple heather covers the hills.

Here, Jacobite rebels
once fled into the hills,
no respite, no cover, no mercy.
All under seventy put to the sword.
The elders must have felt they lived too long
to see this, their sons and their sons' childer
all gone, their goods taken,
their homes scattered stone.

Today, tourists walk up and down the streets
of Fort William, past The Crofters' Bar,
the Jacobite Bakery, munching hot meat pies,
carrying packs, wearing the plaid,
and remembering the songs of long ago.

The history of the "Forty-five" has followed us all through Northern Scotland, a history I'd only read romanticized versions of. Today we visit the Scottish Parliament, which has very definitely a complex history as an independent body functioning from the middle ages to 1707, when in merged with England, to 1998, when the Scottish people voted to restore a limited Scottish Parliament (I'm guessing much like the relationship of the United States state-level government to the national federal government in the United States), where certain powers are reserved for Scotland and certain powers retained by England.

Click these links to read more about the Jacobite rebellions and especially the story of the MacDonalds whose chief was late taking the oath of loyalty. The Campbells travelled to the MacDonalds, and asked for hospitality (this open door policy still exists today, with no doors locked in Orkney or Inverness or Fort William). In the middle of the night, the Campbells attacked the MacDonalds, killing 40, with the rest fleeing for safety to the rugged hills of Glencoe, to die there of cold and exposure. The Campbells still are scorned for their treachery, still some 300 years later. Read more of this history (and see more pictures of Glencoe here. In my poem I'm mixing two stories, that of Glen Coe (the MacDonalds and the Campbells) and the Duke of Cumberland's order to kill those under 70 following the battle of Culloden.
Posted by Beth Camp at 4:18 AM 1 comment: