Finding inspiration in images and research . . .

Each day begins with a little writing. First I open my daily log, note down questions I want to answer, and I stare at the images I've begun to collect. For each day begins with a little writing. Just a micro-scene that allows me to explore my characters. I know where the story is going, but I'm less sure of the supporting cast. Later, if there's time, I do some research for I'm drawn to the women of this time.

This week's discovery is two-fold. First, Letitia Hargrave. She was born in Edinburgh in 1814. Somehow she met James Hargrave, the Chief Factor who served the Hudson's Bay Company in upper Manitoba, at York Factory, the opening scene of Rivers of Stone.

When they married in 1840, Letitia was 27. They lived at York Factory from 1840 until 1851. Note that my Rivers of Stone begins at York Factory in 1842. She was one of the first English brides brought to Canada, and her gift is her letters, collected into a book in 1947.

Letitia Hargrave was a shrewd observer. The voice that emerges from these letters is of a woman with close ties to her family back 'home' who is discovering her new 'home' as the wife of a powerful man in very isolated upper Manitoba. So far, I've only found a few pages of her journal to read online; the book itself is not available at local libraries. But I did find one book, Recalling Early Canada, a formal study of letters and life, with one chapter devoted to Letitia. Just like chocolate ice cream!

Second treat this week: I was trolling online at the Spokane Public Library, actually renewing books, when their ad announced they've begun to digitize a few documents from their Northwest Room, a reference collection. Of course I can go there. It's just downtown, a ride of 20 minutes, throw a quarter or five into the parking meter, no pens allowed, and I could spend hours reading. Sounds like fun.

But I found online the Journal of a Voyage from Fort Vancouver to York Factory Hudson's Bay 1841 by George T. Allan. This 34-page treat gives me Mr. Allan's recollections, recorded 50 years later, of this memorable trip. I have my maps out!

The Whitman Mission. The Oregon Treaty of 1846.

The plot thickens. My characters begin to find their way.

In what ways do images and research inform your writing?

A little reading . . . and scalping

Two books came through this week, both exactly in the time period I'm digging into.Both are older books, but both have lovely maps, photos, and anecdotes as well as all that academic stuff to dig through.

But this morning's side trip is about scalping.

In Rivers of Stone, Catriona watches a card game where one of the players, a voyageur, plays with his scalping knife when he gets nervous.

Now I have never seen a scalping knife, so it seemed appropriate to find an image. This was a ghoulish side trip early in the morning. Apparently these scalping knifes are about the size of a butcher knife, typically 10 inches long, and slightly curving, though they come in a variety of sizes and shapes. Not all tribes used these scalping knives for they were considered ceremonial knives. 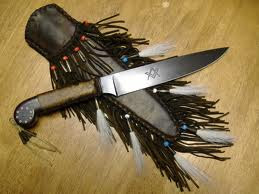 Some scabbards are simple leather; others elaborately beaded.
Along the way, I learned that in battle, scalping women and children was believed to be honorable as it meant the warrior had penetrated to the heart of the enemy.

After reading about this history online, I'm not so sure someone would just 'play with' a scalping knife, for I think these weapons carry the deadliest of intentions. These don't look like fighting knives that one would pull out for self defense.

Read a little more:
Hudson Bay Company report that early small pox epidemic could be traced to scalping of Snake Indians who had traveled from Mexico to Canada in the late 18th Century.
Image of scalping knife from Deadliest Fiction (Wikia).
An excerpt on the Hudson Bay Company in Oregon from William Henry Gray's A History of Oregon, 1792-1849 (Chapter XXII)

And where does your research lead you?
Posted by Beth Camp at 9:05 AM 2 comments:

Thank you for reading my blog and participating in my writing journey.

To say thank you in a tangible way, I've cut the price just for the month of September to 99 cents for The Mermaid Quilt and Other Tales on Kindle and Smashwords.

Yes, I'm getting ready for the fall launch of two of my historical fiction novels, Standing Stones and Years of Stone. But I'm still experimenting with all that goes with being a writer in this digital age -- that's outside the box of actual writing. I'm talking about cover design, marketing plans, distribution channels, and, yes, pricing.

So, go ahead. If you haven't already read The Mermaid Quilt, you might enjoy this collection of 8 short stories and 10 poems. NOTE: The Smashwords version includes mermaid photos I've taken over the years and the opening chapters from Standing Stones.

Or, if you're feeling bored, I just discovered Flickr and uploaded several hundred shots taken in England -- yours to use freely under Creative Commons.