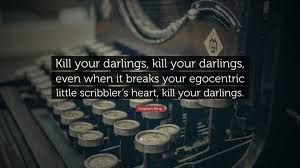 Stephen King advises writers to "kill your darlings." He was talking about characters, though, not scenes.

Now that the first draft of The Seventh Tapestry is relatively complete, I'm at what's called the structural level of editing. That's when I go through the entire story, looking for what doesn't fit the overall theme or what's missing. In the process, big chunks may get added and some scenes deleted. So, Neil now has one brother, not two. And, Sandra, new to Edinburgh, finds her own apartment -- without Neil's help!

Here's the scene that got cut today -- for your reading pleasure.

Neil strode away from the Royal Chip Palace, wondering what he was going to do about Sandra. He couldn’t help his reaction to that glimmer of vulnerability in her eyes, that honey blonde hair, maybe falling to her shoulders, and the way she pulled it back into a business-like scruff at the back of her neck. He wanted to touch that hair.
Her no-nonsense approach covered a glimmer of vulnerability in her eyes, and her outfit couldn’t quite hide curves, though she’d tried with a simple gray suit. When she stood, her long legs took her nearly to his chin. But, she was an American. Probably high maintenance. Or that’s what Ian might say.
“How about I meet you there?” she’d said. So, she didn’t want him to know where she was staying. No, that wasn’t it. She needs an apartment. He tapped a number on his cell phone. “Colin, can you help me out?”
“Aye, me brother.”
“I just met someone. I’d like you to help her get an apartment.”
“Whoa. Slow down. You just met someone, and you want me to do what?”
“It’s not like that. She’s working undercover and just got to Edinburgh.”
“And I wanna meet her.”
“Not a chance.” Neil grimaced. OK, I don’t want either one of my brothers sniffing around, but I shouldn’t get involved with her either. Even if I want to. He sighed. “Just send me a list, no?”
“Okay. Short-term or long-term?”
“I dinna know yet. Maybe three- to six-months?”
“Nobody’s in the apartment over my shop,” said Colin. “We could keep an eye on her.”
“I’ll see her tomorrow and let you know. So, anythin’ new?”
“Nah. Ian’s coming over the night for dinner and a few beers. You want to join us?”
“I’ll be there. Headed to work now. Thanks for offering the apartment. That might work out very well, if she says yes.”
“And if she says no?”
“Dinna worry. That’s why I asked you for a list.”
“You like her, don’t you?”
Colin’s laughter echoed as Neil hit the end button on his mobile. Maybe he should just introduce Sandra to both of his brothers and get it over with. But he didn’t want to.

What I learned about Scottish dialect from writing this scene? Just as we almost unconsciously adjust our word choice based on who we're talking to, people in Scotland will use Gaelic slang most with those who are closest. Kind of like not swearing in front of your grandmother. So if you are American or English, expect pretty 'normal' wording with less dialect, unless the situation is charged with emotion.

Other News: My entry, "A Poem for Frida" made the short list for WEP's August Challenge, the Red Wheelbarrow. What a really fine surprise! You can go HERE to read the winners and other submissions and find out more about WEP's every-other-month writing challenge. (WEP stands for Write . . . Edit . . . Publish.) Why not consider entering their October challenge -- just in time for Halloween! And what are you up to, now that summer is definitely turning to fall?

IWSG: September: A Place to Write

Each month, the Insecure Writer's Support Group posts a question for writers to ponder and write about. September's question: If you could pick one place in the world to sit and write your next story, where would it be and why? 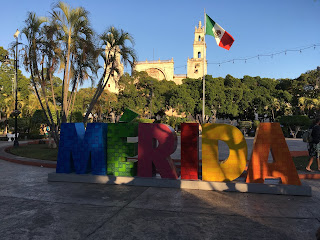 In February 2018, we spent a month in Merida, Mexico. We rented a house close to the centro. We could walk to our favorite restaurants and open air markets.

Friends came to visit us, and we took day trips to Celestun, Kabah, Uxmal, and Chichen Itzah.

But the mornings began with writing -- whether by the small dipping pool or in the hammock on the rooftop patio.

And for that month, I could drop by Merida's English Library, where a small group of dedicated writers met to critique their work.

Or we could wander in local museums.


Truly, I could travel anywhere in the world and find a place to write. Some places we've lived -- Mexico, Turkey, and France -- still resonate with memories of walks we've taken, history and culture we've discovered, interesting conversations with people we met along the way, and always, time for writing.

May you find your own place that inspires you to write!