WIPpet and Crossing the Rockies

Right now I'm working on those scenes that take Cat further west in her crossing of the Rockies in mid November. Sometimes it feels a bit incongruous to be warm and inside while writing these scenes.

Although I've hiked around Jasper and Banff in the summers, sometimes it's hard to visualize what Cat and Kane experienced as they plough through heavy snows on snowshoes.

My fallback is to read everything I can find and to stare at old paintings and photographs to bring the reality of winter alive.

Today's also WIPpet Wednesday, the day we share a snippet from our work in progress (wip), somehow based on the date (25 minus 11 = 14 sentences).

To set the scene: Catriona, disguised as a boy, travels with a Hudson's Bay Company brigade across Canada to Fort Vancouver. It's 1842. The small party of 7 has made it through the Athabasca Pass. Along the way, I've learned how to make snowshoes from pine boughs and how to build an emergency tent out of a blanket. Here, Cat has her first crossing of the Wood River:

After a short conference, two of the strongest men made a chair of their hands for Mary Lane to sit upon. Cat watched as they carefully carried her across the Wood River, holding her aloft when the water ran shoulder deep. Then it was Cat’s turn. Though she was one of the smallest, she was not carried. Cat gasped as the ice-choked water reached her chest and lifted her. She grabbed the hands of the man next to her. Each man in the chain supported the next as they crossed to avoid being swept away.

“I’m glad that’s behind us,” said Cat as she pressed the icy water from her leggings and jacket.

“Dinna be so fast to celebrate. We have a few more crossings ahead.” Thurston pointed at the snake-shaped river ahead of them, its swift current breaking into little white waves in the center with ice chunks clumped along the bank. Pine trees heavily laden with snow grew near to the river’s edge except where avalanches had wiped the hills clean. The men slid and stumbled along steep banks of icy gravel.

Before the afternoon, they crossed the Wood River another thirty-six times.

Again, to peek into the process I use, here's a photo of a sternwheel steamship I found online that was once used to take tourists on the Wood River to see the white water. Dated 1902, the photo inspired some of my description. And it wasn't winter! 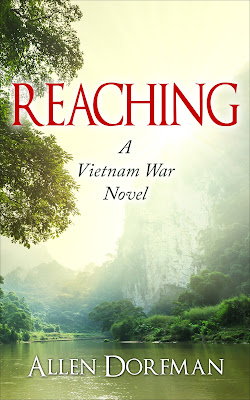 This Veteran's Day we seek to honor those who have served our Country.

Over the 200 years of our country's history, countless numbers of men have enlisted or been drafted.

In the Vietnam War alone, over 9 million served between 1964 and 1975. Many thousands died; others came home wounded or irrevocably changed by their experiences.

The generation of men who fought during the Vietnam War are now in their 70s. Many of their stories are untold.

I remember the headlines and the peace marches in San Francisco in the late 1960's and early 1970's. But I was somewhat insulated from the Vietnam War. No one I knew had been drafted into the Army. I was working full-time at a conservative bank while carrying 8-10 credits a term at night school. Buried in the library and writing that next assignment, I ignored events around me until May 4,1970. Kent State shocked me. The Ohio National Guard shot into a crowd of anti-war protestors, killing four and wounding another nine students.

Then I met Allen. He was footloose, ready to travel south to Mexico to study at the Instituto in San Miguel de Allende and to write his novel, based on his experiences in Vietnam. We fell in love, married eventually, had a daughter, and Allen set his book aside. That was 40 years ago.

Allen's 70th birthday was this past August. Our daughter came to me and said, "Mom, we should publish Dad's book. People need to read it." And so we have.

REACHING presents one man's interpretation of what happened.

Out of respect for all who have served, the Kindle version of REACHING is available as a FREE DOWNLOAD on Amazon from November 10 through November 12.

Link to REACHING on Amazon

This month's project to use NaNoWriMo to finish the draft of Rivers of Stone has meant some rethinking of the overall structure of the story and the emotional journey of my key characters.

I've been intrigued by this process and am just now working on that winter crossing of the Rocky Mountains. Surprisingly, as I'm writing about Cat's journey from York Factory in Upper Manitoba to Fort Vancouver along the Columbia in Washington State, the story happens to be set just about now, early November.

In the section I'm working on, it's 1846, and Cat, disguised as a young, male clerk, travels with a fur brigade over the Athabasca Pass to Boat Encampment.

Once they've successfully reached Boat Encampment, that place where the Wood River meets the Columbia, they must have felt a tremendous sense of relief, as they were greeted by the men from Fort Vancouver, hot fires, and finally enough food to eat.

Paul Kane painted a quick sketch of the campgrounds at Boat Encampment on September 22, 1847: 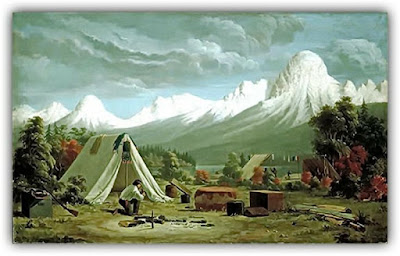 'Boat Encampment' by Canadian artist Paul Kane. Painted while travelling with a HBCo fur brigade - Sept 22, 1847, Kane with canoe brigade up the Columbia River and arrived on October 10 at Boat Encampment. [near Rockies on Alberta/BC border] They waited until horse trek from Jasper arrived. Then they switched, the horse team taking over the canoes. They managed to bring all 56 horses safely and without loss to Jasper's House [Alberta]. Pinterest by RobinBodnaruk.

But a nasty, nearly 1,200 mile journey down the Columbia River awaits them, past the long series of rapids at what is now The Dalles and the notorious Big Eddy, a massive whirlpool that claimed many lives in that time when the river was the primary (and most efficient) mode of transport. Perhaps the brigade was inured to further challenges.

But I still remember skirting a massive whirlpool when white water river-rafting on the Snake and Salmon Rivers. Our boat, just a little larger than a canoe, came within a few feet of the whirlpool, close enough for me to stare into the deep green swirling center. Our guide said if we got caught in the whirlpool, our bodies would not come up until spring.

I do cherish that experience on these two rivers, for I learned to read the river -- which sections required portage and which V-shaped waves predicted safe journey ahead.

Yesterday, it snowed here in Spokane, just a light sprinkling to remind us that winter closes in. But in the mountains north of here, the real snow begins. I'm happy to bring Cat down out of the mountains and closer to her journey's end.
Posted by Beth Camp at 9:07 AM No comments: 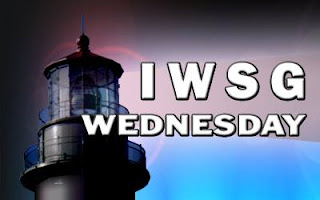 The Insecure Writers Study Group invites writers to post their thoughts about writing challenges/insecurities the first Wednesday of the month. Here are  mine:

Challenge: NaNoWriMo. Every writer dreads the words: writers' block. When this happens, we may find ourselves stuck for days or weeks or months for an annoyingly long list of reasons. Because real life does happen outside our imaginations, and we cope the best we can. Sometimes that translates into fewer words on the page than we want. Enter NaNoWriMo to the rescue!

I do appreciate NaNo very much because my efforts to meet the goal of writing 1,600 words each day -- even crappy words -- pushes me into new territory. I mean this quite literally. Generally, I'm a recursive writer, going over scenes instead of moving forward.

My current wip is close to that editing stage, but I discovered in the read through up to NaNo several problems in the main character's story arc which led to a major restructuring of the plot. And that led to missing chunks -- scenes, characters, plot points. All those tidy 3x5 cards on my corkboard came down. New cards went up, and I'm writing those 1,600 words a day . . . so far.

Challenge: Marketing. The other challenge I'm confronting is the dragon known as marketing. I have mapped out steps to take, but like many other writers, I'd rather be writing! Encouraged by what other indie writers have done, I've set up a GoodReads giveaway, scheduled three free days on Amazon through KDP, and sent out my first e-mailed newsletter this year. See links below.

If it were only for myself, I wouldn't feel so inadequate. But over the summer, I editing and formatted my dear husband's (DH) Vietnam war novel for launch during Veteran's Day week. The book is not an easy read, but tells a story that I really believe needs to be out there.

Challenge: Being an active part of a writing community sometimes seems like one commitment too many. Setting measurable goals and then assessing my performance is never easy.

But in the process of setting those goals, something happens. I make progress. I gain insights about the writing and marketing process, and, hopefully, my comments help other writers.

So I will continue my commitment to online groups like the Insecure Writers Support Group, A Round of Words in 80 Days, NaNoWriMo, and WIPpet Wednesday -- and face-to-face groups, like Spokane Authors.

If any of these groups are new to you, why not check them out?

After a short conference, two of the strongest men made a chair of their hands for Mary Lane to sit upon. Cat watched as they carefully carried her across the Wood River, holding her aloft when the water ran waist deep. Then it was Cat’s turn. Though she was one of the smallest, she was not carried. Cat gasped as the ice-choked water reached her chest. She grabbed the hand of the man next to her. One by one, each man held hands to support each other as they crossed.

“I’m glad that’s behind us,” said Cat as each man pulled the next onto the bank.

“Dinna be so fast to celebrate. We have a few more crossings ahead.” Thurston pointed at the snake-shaped river ahead of them. Before breakfast, they crossed the Wood River another thirty-six times.

“We’ll halt here for breakfast,” shouted Lane. “Rum to warm us, a bit of food to lighten our load, and then we’ve got the swamp.” He waved at the open, marshy area that opened ahead of them. “’Tis about three miles. That should be easy,” Lane said, “after all we’ve done.”

As the picture suggests, I'm with my characters on a winter crossing of the Rockies. Make it a good week!

Allen's website for REACHING: A Vietnam War Novel and links to the GoodReads Giveaway (November 4-15).  NOTE: Reaching (Kindle format) will be offered as a freebie November 10-11-12 to honor Veteran's Day.

Links to my GoodReads Giveaway for Years of Stone (paperback) (November 4-12), and my first newsletter of the year through MailChimp.
Posted by Beth Camp at 1:49 PM No comments: