I'm floating under the wire tonight, nattering away all day on various forms of N, mostly negative for Tasmanian history . . . there's never and no or not at all. Norfolk Island, Nobby's Head, the New Poor Law, and a look at Newgate Prison in mid-19th Century. Even Napoleon figures in somewhere.

Nobby's Head is back on mainland Australia, near Newcastle, the first station outside Sydney, about 70 miles north. Perhaps one of my characters worked here before being transferred to Van Diemen's Land. The coal was a rich vein, some 3 feet thick. Several small teams of convicts were set to work the seam, closely guarded. But by 1821, some 1,169 people lived in Newcastle, some free, some farmers, but mostly convicts to work the coal and cut the cedar forests down. 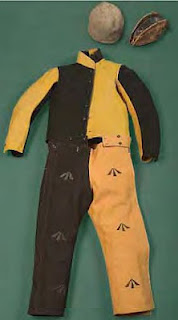 The convicts worked 10-12 hours every day. Once the seam atop the land ran out, the convicts were lowered down a shaft some 100 feet deep by means of a windlass (a kind of rope that we might lower a bucket with). Hughes describes this poignantly, "their leg-irons jingling folornly in the dark" (435). The uniform these men wore everywhere, easily marked a man a convict.

The men lived in something called "slab huts" (I've seen pictures of these huts, raw slabs of wood laid against a loose frame, just big enough to crawl inside). Robert Hughes calls these  huts "cribs a little more than four feet wide, three men to a crib" (434-435). Putting the men three to a crib was supposed to reduce 'unmentionable acts', an issue every governor after Sir John Franklin was called to account for.

Temperatures in the summer pushed over 100. Snakes were common. Hughes goes on to describe a litany of nastiness: "sandflies, mosquitoes, cholera, dysentery, catarrh," and the men further suffered by having no clean clothing, bad air, often no blankets, dampness from water seeping from above them, and, perhaps worst, the constant threat of rock falls (435).

I'm currently reading David Burn's An Excursion to Port Arthur in 1842 (through the online Open Library). Perhaps the nastiest insight I've gained is the sharp divide between the upper classes and the convicts. Burn frequently writes romantic descriptions of the sea, the hills, the gardens, and calls the convicts at Port Arthur lucky for having such an opportunity to have three 'regular' meals a day (bread and skilly, a kind of gruel of flour and water, for breakfast and supper, bread and meat once a day, and only bread and water for recalcitrant or rebellious convicts). He notes the sharp difference in facial expressions between the marines (fresh and hearty) and the convicts (masks of silent rage), and he concludes that the working poor back home in England would be glad if they had the same.

N should be for unthinkable, nasty working conditions.