Today we hiked up to the top
of these sacred hills,
past round stone circles,
here for thousands of years,
where amid ruins,
these large round towers stand,
chullpas, just 500 years old,
as high as four men,
bones still inside. Tiny doors face east,
for from the east, life comes
to those who sit inside in a fetal position,
reborn into circular time that moves
with the sun and the moon.
We descend the stone stairway in silence,
facing east, always east,
a translucent moon rising before us;
a petroglyph shows our journey
and our return. 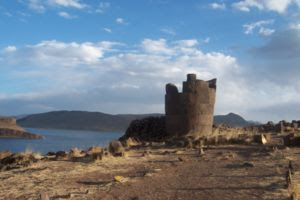 This ancient site of Sillustani, above Lake Umayo, has perhaps been used as a cemetary for 10,000 years. Petroglyphs (a journey circle, a lizard) have been dated to 8,000 BC, and subterranean tombs have been documented to around 500 AD (Tihuanaco), 1000-1440 AD (Colla), and 1440-1532 (Incan). Our guide told us that those buried inside these towers always face east because "we are beings of light, and from the east comes life." He also talked about the duality of life, a kind of tension between the sun and the moon, earth and sky, male and female, even water and plants. This separation continues: Even young men do not wear the hats of women, but wear the hats of men, peaked hats, shaped like mountains. Perhaps the women's hats, rounded bowler hats, symbolize the earth. In these sacred places, he said, any one can breathe in the spirit of the sacred mountains and the sacred lakes. We came here by tour, just outside of Puno, Peru. Read more about Sillustani at Wikipedia. Note the Wikipedia site says the towers (chullpas) were built by the Colla people: our guide told us the towers were Incan (typical large square stone blocks). Even today scholars have not replicated their building process. More photos at Andy's Sillustani page.
Posted by Beth Camp at 5:29 AM