Her head was found. They say
the rest was scattered.
Desaparecidos, they call these lost ones.
30,000 disappeared
sometime between 1976 and 1983.

I stand in the Plaza de Mayo,
wondering again about violence,
remembering when I was young.
Would my mother have worn a white scarf?
Would she have walked slowly
in a circle past the soldiers,
so slowly as to be eternal?


Our guide tells us the women still come here to the Plaza de Mayo, each Thursday at 4:30 pm, circling the plaza silently, holding photographs of those who were lost. A passing man interrupts our guide’s explanations. “Do not step on these symbols. They represent 30,000 lost.” 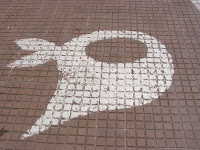 He tells us more; our guide interprets. Finally the man leaves and our guide continues. “We do not support these women today,” our guide says. Other Argentinians in the group nod. “We support them, that is, their main idea and honor what they have done, but today, there are two groups, one is made up of mothers who pressuring the government to admit its culpability; they take money from the government. The other group is made up of the grandmothers seeking to reunite those children who were adopted with their real past, which is very difficult.”

The sun flickers on his face. I do not really understand his distinctions, though I learn later that the more radical group also blames the United States for training Argentina's military in the controversial School of the Americas. The history of Argentina’s “Dirty War” and the Madres de la Plaza de Mayo is summarized more fully in two Wikipedia articles I found useful.

I look at the round plaza and remember learning of these women from newspaper accounts when I was in San Francisco in the 1970s. I marvel I am standing in this place, in the shadow of the Casa Rosada, the Argentinian equivalent of the White House. 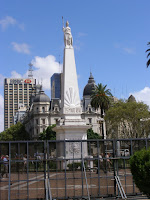