I came to my writing this week not wanting to admit that I was disenchanted with my main character, Deidre. In Standing Stones, Book 1, Deidre was brave. She followed Mac to Van Dieman's Land, flaunting convention, at a time when women had few resources. She became a teacher through her own will, and stood up to her mother and her minister to pursue her own destiny. Yet in Years of Stone, Book 2, once in Tasmania, she deflates, overwhelmed by bustling Hobart Town, unsure of her place, easily cowed by the upper class. No wonder I don't like her any more. This wasn't Deidre.

So when Deidre lands in Tasmania in 1842, would she be less overwhelmed? Is her feeling of ineffectualness really a mirror to my own sense of “Gosh, where am I?” in this not-so-clearly-understood colonial past? She’s not bowed over by convention. In common with Mac, she has the courage to stand up to those in power.

In Standing Stones, both Mac and Deidre suffered for their stand. In Years of Stone, they would not change. They will fight for something, and, they will succeed.

Lady Jane Franklin, the wife of Lieutenant-Governor John Franklin, is a powerful figure in Tasmanian history, but Deidre does not seek approval from her, nor does she aspire to the upper class. So I need to discover what Deidre and Mac are likely to stand for and to defend. That's at the macro level and will help me "see" the resolution of Deidre's initial decision to follow Mac to this faraway land where so many were transported.

Deidre is strong-willed. Her first goal is to get established in rough and tumble Hobart Town of 1842. Does she find a job, a place to stay, a boarding house? Is her money stolen (following the shipwreck, she has some sewn into her clothing). Does she get attacked? Does she walk down the street alone, with men catcalling after her? BY HER OWN EFFORTS, SHE NEEDS TO PUSH THROUGH HER OWN OBSTACLES.

How is she accepted by the middle tier (that’s her true home, not the upper class). Will she be geographically pushed away? If I am to develop CONFLICT, Deidre can never be safe in a place made safe by others. She has to create her own place through her will power and her courage.

After spending three years with this character, I'm still wondering if she sees the forest or the trees? What is her wider vision? What is her fatal flaw? Does she remain worthy of Mac? Is he worthy of her? What I do know now is that she is feisty and courageous, and I care about her again.

Some writers go about telling their stories after resolving these questions. They use any combination of character studies, plot outlines, note cards, even computer-generated programs that help to keep the process organized. I just try to sit down each day and work on the story. Deidre and Mac. Mac and Deidre. 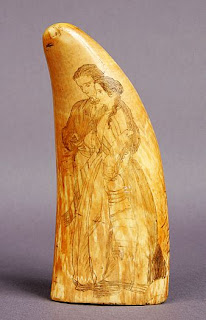 This piece of scrimshaw, carved by some nameless sailor, shows such a sweet couple, perhaps the yearning of this sailor so long ago, perhaps an archetype of Deidre and Mac. The scrimshaw is dated 1840, Tasmania, and held at the Queen Victoria Museum and Gallery.
Posted by Beth Camp at 8:48 AM